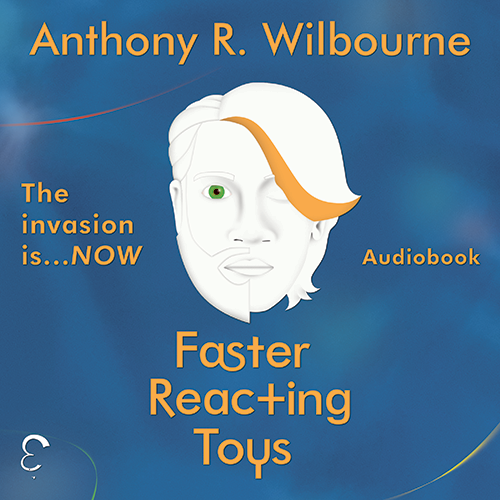 Help us grow. Post a review.
OUR OVERALL RATING:
RATING:

OTHER FORM(S):
eBook
Paperback
Description
A new cell phone, which does everything an ordinary phone can do and many things it can't do, has entered the valley town of Clery. It's called the Pseudopod. Everybody who's anybody is getting one--including Dane Freitag. Within a week, he discovers that the Pseudopods may be influencing people in disturbing, frightening ways. That the devices may be responsible for changes in people's speech, behavior and desires. As a resident of the phone's test market, Dane must unravel the truth of the Pseudopod before its power becomes unbeatable. Will he succeed?

My objective (with this book) was to--as I often told co-workers and other people--create an "Invasion of the Body Snatchers" for the 21st century. "Faster Reacting Toys" is what I came up with. Although I'm a staunch supporter of originality, I'm also a believer in the recognition of people and things that inspire. Clery County was inspired by Seattle, Renton and Sumner, Washington and Tempe, Arizona; the characters were loosely based on people from my life. I classify "Faster Reacting Toys" as tech-fiction (or te-fi) and its narrative as a kind of fourth-person. I've always felt that the narrator of a story--identified or not--should have just as much character as the book's characters or locations.
Author(s): Anthony R. Wilbourne :: Narrator: Auto-Narrated by Google :: Artwork: Anthony Wilbourne
This product is available at:
Google Play
Videos
Audio
Reviews
Press
Misc.